A Lesson in How to Have Fun 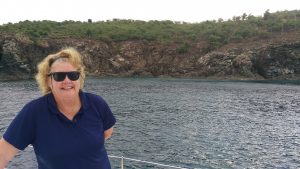 Over a year ago, a small group in the Houston Squadron were discussing a trip to the British Virgin Islands.  It was one of those “sounds like fun, but it will cost too much, I don’t have that time to spare, and besides, no one will sign up; don’t get to excited about this happening” moments in time.  I will admit that I thought the adventure sounded like fun, but I was in no position to organize or even think about getting this adventure off the ground.

Of course, I work with some folks who just say ‘sure, sounds good, let’s put the idea out there and if we get one boat, we’ll go’ attitude.  You know that attitude – as if time, money and obstacles are just the fun stuff to resolve on the way to an epic adventure.

So, an interesting thing happened 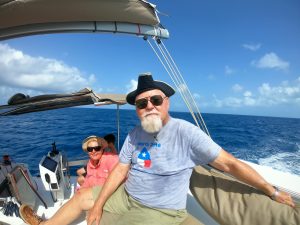 A Squadron member stepped up (Steve), and talked with the boat charter company – they said, sure, we have boats for rent during that time period.  Oh, and we will give you an end-of-season discount.  Almost instantaneously, a ‘special event’ appeared on our Squadron website.  Then there was the email blast to everyone in the Squadron (you might have seen it) asking everyone if they wanted to participate.  Pricing was established, and a possible schedule of events was presented.

So far, it was looking good, but the pessimist in me kept saying ‘Sure, this will happen.’  Then the most interesting thing happened.  A large number of folks responded saying they would be interested.  Then the deposit money came in.  Enough deposit money for 16 persons and two boats!  So about now I’m thinking that this might actually happen, but there is always that ‘something’ that screws up the plans.  Not this time!  The deposits were made with the charter company, two Squadron members stepped up and said they would be captains – Steve Sheward and Tony Lee. I could not believe that was actually going to happen.

I Was Almost Convinced 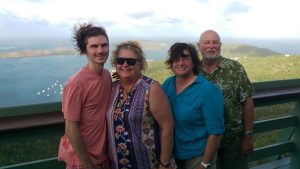 Right about now I was convinced that this grand adventure to the British Virgin Islands would happen.  Enough so that passport expiration dates were checked, time off from work was scheduled, I made sure my son (living in Chicago) had a flight to Houston, purchases of cruising guides and charts of the BVI were made (Amazon became my best friend), shopping to get the right clothing for the climate and about a million other small tasks. And all this with weeks to spare!

I coordinated a gathering with the St. Thomas Sail and Power Squadron in District 33 with a great person, Cdr. Lawrence Benjamin and we met in St Thomas, we enjoyed meeting many of the Squadron members!  There was a great dinner, an excellent time at their “office” and many, many smiles.  What a great host Squadron to start the adventure.

I hope you are enjoying reading the lead-in to the BVI adventure story. Always remember what happens in BVI stays in BVI.  One year ago I thought that this was a pipe-dream.  Now, I look at my mementos, share my photographs and stories, and realize that for any adventure – all you need to do is say Yes! Go all in.

This BVI adventure brought together families, friends and Squadron members.  We had a wonderful time sailing, motoring, swimming, diving, eating, drinking and just enjoying a 2-week adventure.  Like our captain (Tony) said, every morning you wake up to green hills, white beaches and blue water.  It was wonderful and it happened!

This Is My Point

It happened.  It doesn’t matter if you are going to the BVI, or the Pacific Northwest, or just down the coast to Padre Island or over to the Florida panhandle.  To quote from a marketing slogan – just do it.   Most of the obstacles were simply no more than tasks that needed to be completed in a timely manner.  Most of the work was done by individuals who excelled in their areas of expertise.  Everyone who went on the adventure had a task to do, and did it well.

To The Houston Squadron

and All The Other Squadrons Out There

What does all this mean to the Houston Squadron?  If YOU want an event, if YOU want something special with the Squadron, if YOU think that something might be fun and out-of-the ordinary and out of our comfort zone, just do it.  With the membership we have these days there is nothing we cannot do for fun and adventure.

The Houston STAR Report to District 21