The Galveston Boat Club is a private social club that sits on Offatts Bayou on Galveston Island.  The clubs roots are tied to boating, both sailing and motor. 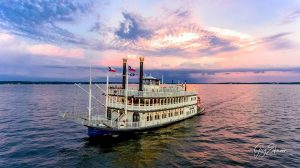 Built in 1983 in a Mississippi shipyard, the 131-foot paddle-wheeler was cut into sections, then transported by 27 semi trucks to the captive waters of Lake Conroe, at Seven Coves. There the craft was reassembled and finishing touches were added. It was then launched as one of the lake’s most recognizable icons.

The Southern Empress has been featured in many blogs and magazines. The Empress hosts private and public cruises year round; from the annual Fourth of July cruise to company Christmas parties.

A 309-acre site on Lake Houston in Harris County (Texas).

Providing great sail boats for charter and ASA certifications at the Kemah Boardwalk.

Boat Ramp on Trinity River, south of I-10

Lose yourself among the majestic trees and natural beauty of the East Texas Pineywoods. Rent a canoe, explore our trails or just relax by the lake. We are a short drive north of Houston, in the Sam Houston National Forest.

Listed address is for the parking lot.  Ideal spot to park for the Cistern tour.

The Houston STAR Report to District 21